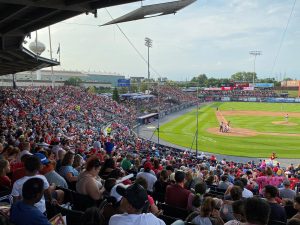 As our community continues to recover from this tumultuous last 18 months, and everything in Baseballtown starts to feel “normal” again, it was certainly a special day at America’s Classic Ballpark, FirstEnergy Stadium.

“It is certainly an important accomplishment for the entire R-Phils franchise, including our wonderful fans, our loyal partners, and our terrific staff, both full time staff, and our game staff”, said R-Phils General Manager Scott Hunsicker. “I think most of the credit needs to be given to our tremendous R-Phils owner, Craig

Stein. Craig allowed us to keep our entire fulltime front office family fully employed, and fully compensated, throughout the entire pandemic. That continuity of staff has put us in the best position to succeed now, as we were able to maintain our partnerships, community engagement, and non-profit efforts, even though we played no games in 2020. Our 2021 attendance has been strong, in large part because of Craig Stein’s efforts to maintain our outstanding front office staff.”

The Reading Fightin Phils want to thank all of their supportive fans for helping amass the largest crowd in all of Minor League Baseball on Sunday night. The R-Phils were the only Minor League franchise to draw more than 9,000 fans on July 11th. The Iowa Cubs had the next largest MiLB attendance on Sunday, reaching 8,575 fans, and the R-Phils nearly reached the crowd of the Miami Marlins, who had 9,456 guests attend their game against the Atlanta Braves.

The Double-A affiliate of the Philadelphia Phillies consistently draws large crowds to FirstEnergy Stadium. Along with elite level baseball and top organizational prospects, the Fightins offer one-of-a-kind promotions and giveaways. There is something for everyone at the ballpark and it will continue to be a place of family-fun and summertime magic all season long.

The July 11th game featured some awesome promotions and giveaways. As kids entered the ballpark the R-Phils Mascot Team Poster w/ Two FREE Rounds of Hitting at Rip It Baseballtown Charities, then they were able to meet and greet with the R-Phils Mascot Band & some of the best characters in all of baseball, thanks to the ROG Orthodontics Kids Club.

Our Capital BlueCross “Hard Work In School Pays Off” program welcomed more than 2,500 fans to the ballpark as guests of Capital BlueCross, rewarding the students for tremendous efforts in school through what was certainly a difficult year. The 6th Annual Customers Bank United Way Ready. Set. READ! Night welcomed nearly 2,000 fans to the ballpark as guests of Customers Bank, with a focus on summer reading. And, the 10th Annual Renaissance Academy Charter School “Crazy About Reading” Program welcomed even more children and their families to the ballpark, as they enjoyed a pre-game reading of “Green Eggs and Ham”, performed by the Crazy Hot Dog Vendor and R-Phils player Brock Stassi.

Our furriest fans were able to attend the game as well as it was a Bark in the Park night thanks to Humane Pennsylvania. Berks Packing Sunday Family Funday was a success with their ticket and concessions promotion.

After the game All Fans were able to ‘Run the Bases’ thanks to 69 News Berks Edition & ROG Orthodontics.

The team continues to play at home at FirstEnergy Stadium from Tuesday, July 13 to Sunday, July 18 against the Portland Sea Dogs (Red Sox). There are numerous giveaways, concerts, happy hours, FIREWORKS, and more scheduled for the entire week. Visit rphils,com for all the promotions. With group packages, daily tickets, and buffets available, there’s a spot for every kind of fan! Now’s the time to get up, get out and join us at FirstEnergy Stadium for a fun, outdoor community event! Visit rphils.com/tickets to attend a game!

The R-Phils are blessed to play in a beautiful OUTDOOR venue and we look forward to hosting you and your family for R-Phils baseball games this season. There is absolutely nothing better than sitting OUTSIDE with family and friends in the summer sun with a cold drink and a fresh hot dog. Join us at America’s Classic Ballpark to make memories that will last a lifetime.

The 2021 season is presented by Pepsi. 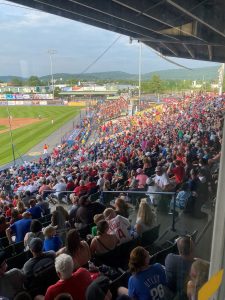 If You Spot This in Your Mouth, You’re at Risk for Heart Attack, Says Study