Seaport Fudge Factory has kept dentists in business for 30 years 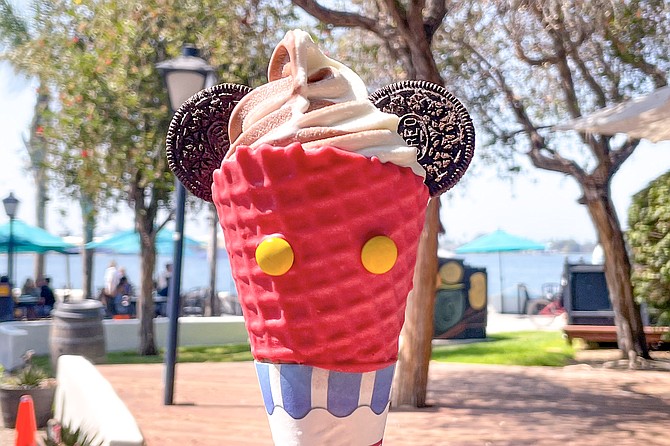 I’ve photographed burritos, dumplings, and egg rolls, but probably the most challenging photo I’ve ever tried to take centered on a lump of fudge. I’d ordered the rocky road flavor, hoping that the large, white marshmallow at the fudge’s center would provide eye-pleasing contrast. I’d counted on the wave of chocolate, folded over the top when it hardened, to frame the piece like a pompadour. Two dozen, three dozen snaps, and not a one could find focus. However rich and sweet that $6.50 piece of fudge might taste, I could not find a way to make it photogenic.

The waterfront dessert shop has had three decades to figure this out. Established in 1991, the Seaport Village mainstay is celebrating 30 years in business. And though the Fudge Factory lives up to its name with decadent, buttery fudge, most of its offerings these days are more colorful, and hold a relatively well-defined shape. At the top of the list has to be the Mickey Mouse ice cream cone.

Bear in mind, for some length of its tenure, the Fudge Factory has shared its duplex shack with a Ben & Jerry’s franchise, so I’ve got to assume most Seaport visitors craving ice cream look right past it, whether tourists or staycationing locals. But take a closer look at the family-owned Fudge Factory, and you’ll notice plenty of soft serve ice cream options, including a Belgian waffle topped with a swirl of chocolate-dipped soft serve surrounded by Oreo crumbles. Consider it a ten-dollar sugar crash waiting to happen. 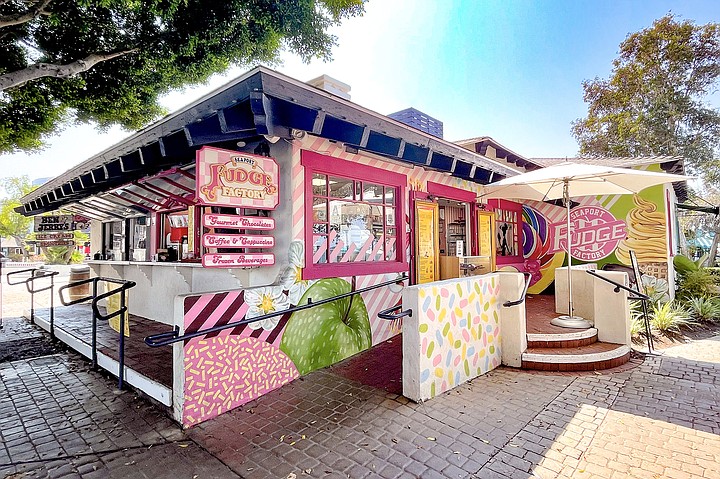 Much cuter is the Mickey Mouse cone ($9.50), which for starters has been dipped in red chocolate (rather, a red-colored white chocolate — or pink chocolate, should you prefer a Minnie Mouse cone). A pair of yellow M&Ms front the cone — either representing Mickey’s iconic yellow buttons, or his eyes, I’m not sure. Easier to figure are the Oreo cookies propped up on either side of the soft serve, forming the cartoon character’s famously round ears.

Think what you will about the pricey cone: I have no doubt it makes a more memorable treat than any amount of Chubby Hubby. 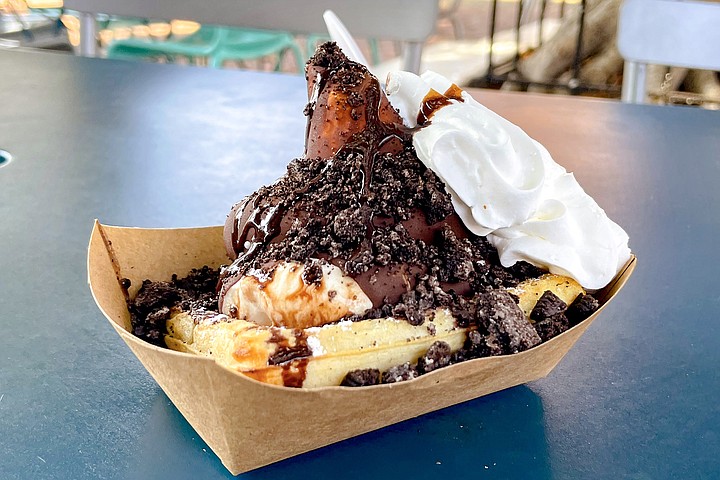 For those neither feeling ice cream nor fudge, a third option delivers a bit of fruity fiber on a stick. I’m accustomed to candied apples coated in caramel, and nothing short of the county fair could have prepared me for the ways a tart, green apple could be made implausibly sweet. They dip it in caramel, sure, but then, when that dries, they dip it in white chocolate. And then, before that dries, they stick it in a pile of something crunchy. Crushed peanuts would be one example. Fruity Pebbles cereal would be another.

Inevitable, one of the kids tagging along for my fudged-up photo excursion had eyes only for that rainbow-colored feast.

“Would you like me to cut that up for you?” the woman working the counter asked. 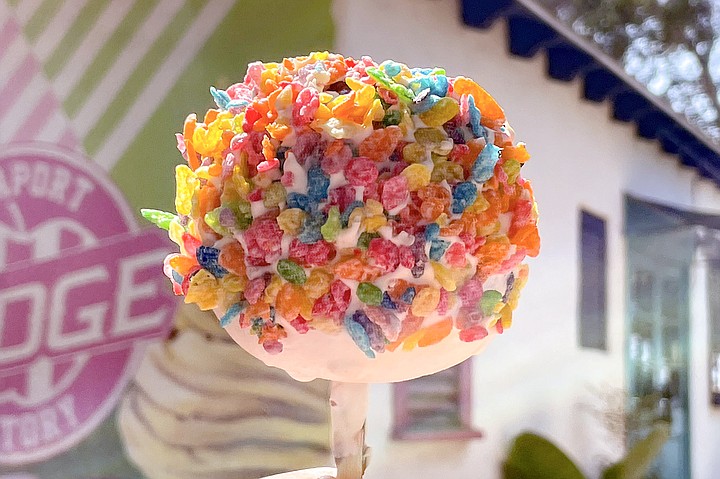 “No way,” I replied. Candied apples are meant to be eaten on a stick, I reasoned. And besides, I needed a good photo subject to get around that fudge.

Well, I got my photo, but we learned a valuable lesson: say yes next time. The first bite of a large, crisp apple is tough enough without having to break through two layers of sweet treat, and a coating of sugary breakfast cereal. The kid sure couldn’t do it, and my attempts didn’t fare any better. My apologies to the Seaport Village custodial staff for the mess we made. I hope they blamed tourists.

Seaport Fudge Factory celebrates its anniversary with a free luau on August 29, from 5-8pm.

Amazon Prime Day deals: Last chance to get Crest 3D Whitestrips and Waterpik for 43% off