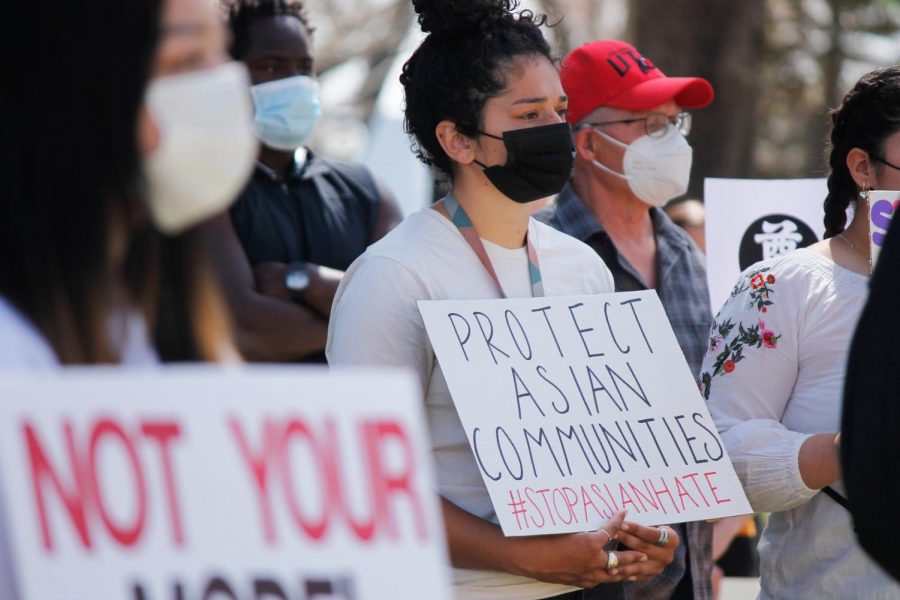 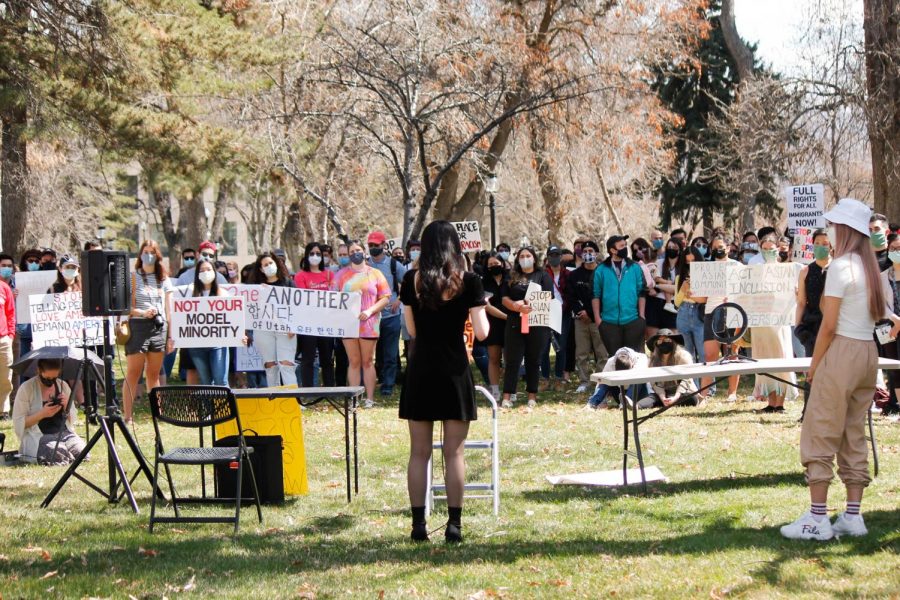 On April 3, 2021, two University of Utah students led a protest in support of Asian Americans in wake of the Atlanta spa shootings and rise in anti-Asian hate during the pandemic. Over 100 people gathered in Washington Square, holding signs reading “not  your model minority” and “hate is a virus.”

Christine Min, a pre-dental student in her fourth year, and Serena Aeschilman, a senior studying computer science and economics, initially started planning their own protest separately, but soon joined forces when they heard of the other’s plans.

This was Min’s and Aeschilman’s first time planning a protest and while they were the main organizers, they did receive help from a team of volunteers and various organizations like the Utah Party for Socialism and Liberation and the Women’s March Salt Lake City.

Aeschilman was tasked with organizing permits and COVID-19 guidelines for the event while Min worked on community outreach.

“A lot of Asian culture is about staying silent and not raising our voice, not making a scene, not putting too much attention to ourselves and not being a burden to others,” Min said.

Aeschilman shared a story that happened at the beginning of the pandemic, where she was told to go back to China and take the virus with her. The man assumed she was Chinese, even though Aeschilman is Taiwanese.

“I realized that that’s a problem that a lot of people do is they assume your Asian identity, especially right now, Asians across the board are being attacked,” Aeschilman said.

She began to post news on her Instagram story about anti-Asian violence and was upset when her mostly non-Asian following failed to repost the content. She was also disappointed in the lack of reporting on this violence in the mainstream media. Under the few articles that were written, Aeschilman said some of the comments were terrible.

“Someone on the Fox 13 one said that this stuff doesn’t happen in Utah and that’s what really got me mad,” she said. “This does happen in Utah, maybe not to the same extreme that other areas are facing, but there are definitely discrimination and microaggression encounters here.”

“I sent a message to them saying that it’s very disappointing that you have so many Asian students, and you have a campus in my home country, but yet you haven’t said anything about this,” Min said.

At the protest, around eight people joined the organizers in sharing their experiences and expressing their support.

Tiffany Chan, the vice president-elect of student relations at the U talked about the causes and problems with Asian hate.

“The Asian American experience is multifaceted and complex, especially for women who experience another myriad of gender-based violence. Among these are fetishization and white sexual imperialism,” Chan said.

She continued on to talk about holding the state accountable.

“Those who incite and are complicit are the ones to blame. So the state and its power structures need to be held at the highest accountability,” Chan said. “The increase of hate crimes against AAPI is a direct result of sanctioned sinophobic propaganda.”