Shares of SmileDirectClub (NASDAQ:SDC) posted some impressive gains recently. On Oct. 6, 2021, the stock shot up around 15% after members of Reddit’s WallStreetBets community began expressing bullish sentiment for this chronic underperformer.

The company’s dentistry-light approach to providing tooth-alignment services makes a lot of sense in a country with woefully limited access to dentistry. In 2019, more than one-third of U.S. adults didn’t even go in for a cleaning. 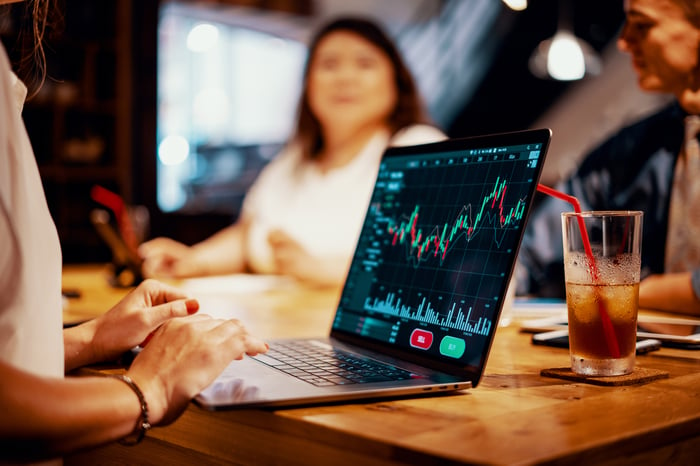 Recently, the SmileDirectClub told investors it received a patent for its innovative SmileBus concept. The SmileBus cruises around the country doing free mouth scans. The company can use those scans to craft a set of clear tooth aligners for people who might not have considered the procedure.

The bull case for SmileDirectClub

SmiileDirectClub’s also aiming for customers with general access to dentistry, in addition to those who don’t receive regular checkups.

The company’s biggest competitor in the tooth-alignment space, Align Technology (NASDAQ:ALGN), encourages dentists and orthodontists to market its Invisalign brand of clear aligners to their patients. Acting as middlemen, dental professionals charge their patients significantly more for Invisalign than those patients might pay for a similar set of aligners from SmileDirectClub.

Investors have also been encouraged by Dentsply Sirona‘s (NASDAQ:XRAY) acquisition of Byte at the end of 2020. Byte is another manufacturer of a clear tooth-alignment system that doesn’t require customers to visit an orthodontist.

Byte was a relatively small company with just 450 employees, but Dentsply Sirona paid more than $1 billion in cash. SmileDirectClub is a much larger operation that had around 4,000 employees at the end of 2020.

A quick, back-of-the-envelope calculation suggests a buyout offer with a juicy premium is just around the corner. At recent prices, SmileDirectClub’s enterprise value is just $2.75 billion.

The markup dentists receive from each set of Invisalign aligners they sell is a strong incentive to market Align Technology’s products. It also allows SmileDirectClub’s competitor to run a much lighter operation.

Over the past year, for every dollar of gross profit recognized, Align Technology spent just $0.58 on sales, general, and administrative (SG&A) expenses. By the same metric, SmileDirectClub spent an unsustainable $1.87 on SG&A.

While Align Technology blocks SmileDirectClub’s path to growth by selling aligners to people with access to general dentistry, Dentsply Sirona is coming after SmileDirectClub’s traditional customers. The service Dentsply Sirona acquired at the end of 2020 sells a low-cost option that employs professional dentists at a distance so customers don’t actually need to visit a dentist in person.

It doesn’t look like SmileDirectClub can win a pricing war with either of its big competitors. Dentsply Sirona’s new subsidiary Byte sells aligners starting at just $1,895 per set. That’s just a hair above the average sales price of $1,885 that SmileDirectClub reported in the second quarter. Align Technology’s average selling price to bricks-and-mortar dentists is around $1,050 for sets of relatively simple aligners.

Dentsply Sirona is a very profitable company that can afford to sell clear aligners at a loss until SmileDirectClub implodes — and it might not take very long. SmileDirectClub finished June with just $$377 million after losing $151 million in the first half of the year. Another year of heavy losses is probably more than its shareholders can handle before they run for the exits.

This article represents the opinion of the writer, who may disagree with the “official” recommendation position of a Motley Fool premium advisory service. We’re motley! Questioning an investing thesis — even one of our own — helps us all think critically about investing and make decisions that help us become smarter, happier, and richer.

Fusion Implant Center Announces Grand Opening, Providing Dental Implants to Louisiana from a Team of Experts in One Location